We got the news of the Oregon political prisoners NOT GUILTY verdict while at a liberty event in Colorado. We had been asked to come and address the locals there a second time because, believe it or not; FBI, BLM and Oregon agents had indeed followed us to Colorado asking the local Sherriff to be deputized so they might raid our event. The FBI, BLM and Oregon agents were practicing irresponsible tactics of intimidation and libel with the assumed goal to silence our right of free speech.

We were not made aware of these agents’ inappropriate conduct until weeks after the first event in Colorado. This was because our wonderful host wanted to do her homework before she said anything to be sure she had correct information.

Our host interviewed the Sherriff and then filed an open records request on July 20th 2016 to get a copy of the memo that was sent to the Delta City Council, Interim city police and all department heads.

The envelope the memo came in:

The letter that accompanied the memo: 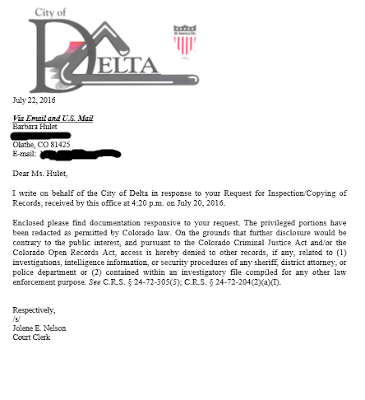 Our host then went to the City of Delta's council meeting. She read the memo into the public record. They mentioned how they were libeled as very dangerous people, she talked of the power in words and read from the FBI's website how they are defining "Sovereign Citizen." She then went in to get the minutes on Friday Aug. 12, 2016 and found how they did not transcribe their words.

To take it a step further, here is an article in the Delta County Independent by Pat Sunderland published August 10th 2016 talking about our hosts questioning the libel given them by this memo, published 1 day before they spoke with Charles Kettle, the interim police chief on Aug. 11, 2016.

Were we shocked that we were being followed, that the agents were seeking to intimidate and/or manipulate local law enforcement so to become deputized or that tools of slander were being used to stir up the local citizens in anger and fear for our upcoming arrival for the first event?

Agents went to such lengths using the same tactics in Eastern Oregon when LaVoy and others arrived to peacefully petition the government for a redress of grievances ending with our husband and father being assassinated.  Here is yet another example of agents irresponsibly using their delegated control.

After all the leg work had been done a letter was written and sent to the Finicum representatives communicating how we would like a face to face meeting with them to discuss our situation and ways to move forward in building the disintegrating trust between the governed and those who are governing.

Subject: My mother and I are seeking your advice and support.

OVERVIEW OF ISSUE:
My father, Lavoy Finicum, was shot and killed by Oregon State agents, in coordination with Federal agents, on January 26, 2016. My mother, Jeanette, and I have been invited to speak at events around
the country to give a voice to our father’s death. Since then, The FBI, BLM and Oregon agents
are practicing irresponsible tactics of intimidation and libel with the assumed goal to silence my mother’s and my right of free speech.

They have libelously labeled us as an irresponsible group known as “Sovereign Citizens.”. And they have sought to be deputized and raid an event, held for us, outside of their jurisdictions.

My mother and I are seeking to remedy these irresponsible actions, through your advice and support. We sincerely desire and seek a relationship process that includes rebuilding trust between us and our governors.

THE HISTORY OF THE ISSUE:
A meeting took place roughly around June 20th – 28th, 2016 involving the FBI, BLM, Oregon State and Delta County agents. We do not know who organized the meeting in Grand Junction, CO (Mesa County) but it has been assumed the FBI, BLM and Oregon officials led the meeting.
Delta County Sherriff Fred McKee and Charles Kettle who is the Delta, CO interim police chief attended the meeting. Barbara Hulet (organizer of the event for my mother and I) along with other individuals met with Sheriff McKee and Chief Kettle to confirm the meeting and their attendance. The sheriff and police of chief were very concerned about not disclosing any names of the agents who were there or any other details such as who organized the meeting, why it was organized, when the exact date and location was etc.
They did disclose how the agents were asked permission to conduct a raid on the symposium that was being held at the Delta Fireside Inn, 820 Highway 92 in Delta, CO (Delta County) scheduled for July 6th, 2016. Fortunately, the Delta Sheriff Fred McKee and Charles Kettle, the interim police of chief did not give them permission to raid the event. They expressed how many people in the event would be carrying a fire arm on their person and how they had a right to do so. Barbara thanked the Sheriff and expressed how there were children at this event (including my children and Barbara Hulet’s daughter).
Barbara Hulet found a memo labeling all those who attended the July 6th symposium as “Sovereign Citizens”. This memo was sent out to the Delta City Council, Interim city police and all department heads. She filed an open records request on July 20th 2016 to get a copy of that memo (SEE ATTACHED). This memo was dated June 28th 2016, 8 days before the event that I, Thara Tenney spoke at. It specifically stated how my father, LaVoy Finicum was labeled as a “Sovereign Citizen” and how his wife, Jeanette Finicum would be in attendance. There is no evidence my father was a member of or made any public declaration of support for “Sovereign Citizens”. He always instructed us to be responsible citizens with a responsible government.

On Aug. 2nd Rosemary Anderson, Bev Watts and Barbara Hulet (individuals who helped organize the July 6th symposium I spoke at that the FBI wanted to raid) went to the City of Delta's council meeting. They read the memo into the public record. They mentioned how they were libeled as very dangerous people, Rosemary talked of the power in words and read from the FBI's website how they are defining "Sovereign Citizen", Bev Watts spoke of how they don't belong to or support any such groups. When Rosemary, Donna and Barbara Hulet went in to get the minutes on Friday Aug. 12, 2016 they found how they did not transcribe their words. Here is link to minutes, also see attached: http://cityofdelta.net/documents/agendas%20and%20minutes/minutes/2016/ccminutes08022016.pdf

When Barbara Hulet, Rosemary, and Donna Biliko spoke face to face with Charles Kettle, the interim police chief on Aug. 11, 2016 about the memo, he said he told the city manager David Torgler to send out the memo and that he (Charles Kettle) is taking full responsibility for the memo despite the fact that he says David Torgler the city manager is his boss. In speaking with Charles Kettle (police chief) he expressed he did not fully understand the meaning of being libeled sovereign citizens. Rosemary told him he needed to write a letter to the editor apologizing and Chief Kettle said he would have to have that approved by his boss Mr. David Torgler, city manager, whose name is on the memo. The apology has not taken place as of 9/1/2016.
Here is a link to an article in the Delta County Independent by Pat Sunderland published August 10th 2016 talking about these 3 women questioning the libel given them by this memo (published 1 day before they spoke with Charles Kettle, the interim police chief on Aug. 11, 2016: http://www.deltacountyindependent.com/residents-protest-sovereign-citizen-label-cms-4308

This irresponsible intimidation and libel is both unacceptable and bordering on harmful. And it needs to stop.

I, Thara Tenney, the oldest daughter of LaVoy Finicum, was the main speaker at this symposium. My speech is titled, “Habits of the Heart; a Perpetuation of Freedom”. In this speech I talk of my father, LaVoy Finicum, who he truly was, what enabled him to be a powerful voice for freedom, what got him to Oregon, what he was accomplishing in Oregon, and I end with an invitation for others to do their due diligence to maintain our republic as responsible citizens.

I CALL FOR A FRESH, NEW ERA OF PRO-RESPONSIBLE GOVERNMENT BY BOTH THE GOVERNED AND THE GOVERNORS!

The GOVERNMENT (it) is being misused by irresponsible governors to intimidate and slander me and my mother as we are being followed by them having our reputation and character libeled and slandered by them and intimidating citizens and governors of other states. My children were put in harm’s way as the FBI sought the blessing from the local sheriff to raid our event.

We will continue to remain steadfast! We will continue sharing our account of my mother’s husband and my father’s voice. We refuse to have his voice buried along with his body! We claim our right to freedom of speech, free from intimidation by those entrusted with the reins of our government.

WHAT YOU CAN DO FOR US:

·        We would like to know any unknown details about the CO event meeting of FBI, BLM, Oregon State, and Delta County agents (i.e. such as who organized the meeting who was in attendance, and how any such irresponsible governors are going to be held accountable (e.g. IRS targeting conservative groups, etc.).
·       We would like an inquiry into what criteria was used to link my mother, any afore named Colorado citizens, and myself to an abhorrent group known as “Sovereign Citizens.”
·       We would like to know are we on a list linking us to this irresponsible group? And if so, where is the list? What is the criteria for placement on the list? What is the process for removal (i.e. you would handle that, we would sue, etc.)?
·       We would like you to ask the House Speaker and Senate President Pro Tempore for a Joint Citizen’s commission to study and recommend clearly defined boundaries of what is and is not ‘domestic’ and/or so-called ‘right-wing’ extremism in relation to the abhorrent group known as ‘Sovereign Citizens’.
·       We would like an inquiry into the Department of Justice’s criteria for labeling ‘domestic’ ‘home grown’ and so-called ‘right-wing’ extremists, intergovernmental coordination for interdicting those labeled as ‘domestic’ ‘home grown’ and so-called ‘right wing’ extremists and what remedies or appeals exist for those governed who find themselves labeled as such.
·       We would like a face to face meeting with you to discuss our situation and ways to move forward in building the disintegrating trust between the governed and those who are governing. Be assured our request is sincere and it is our hope to find ways to rebuild and bridge the gap that exists. Our pain is palpable but our resolve to improve the future is concrete. We would like to do this together.

I CALL FOR AN END TO IRRESPONSIBLE GOVERNORS USING INTIMIDATION AND BORDERLINE LIBELOUS SLANDER THAT IS INJURING ME, Thara Tenney AND MY MOTHER, Jeanette Finicum AND HINDERING AND RESTRICTING OUR FREEDOM OF SPEECH.

I DECLARE AND PLEDGE MY ALLEGIANCE AND RESPONSIBILITY TO SUPPORT, KEEP AND MAINTAIN A PRO-RESPONSIBLE GOVERNMENT – THE UNITED STATES OF AMERICA.

Yours Affectionately – With Humility and Resolve,

How wonderful it was to announce the NOT GUILTY verdict during the second event in Colorado. The crowd cheered, cried and prayed together. The exact same presentation was given followed by an explanation of the information above followed by an invitation for the people to make their own conclusions. Sheriff Richard Mack the founder of Constitutional Sheriffs association and Dr. Angus McIntosh founder of Allotment Owners in the Western States also spoke and delivered powerful messages on how property rights and law should appropriately interact with one another. 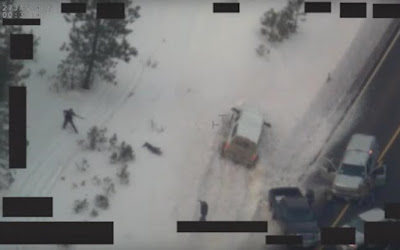 found that LaVoy too was NOT GUILTY! 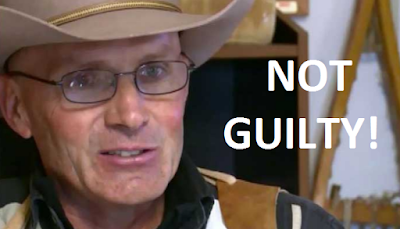